Mary Had A Little Lamb

Except for the sporadic coughing I am finally flu free! I haven’t done any painting since last week. Below is one of my older paintings and one of the last ones I finished last month. This was inspired by the nursery rhyme “Mary Had A Little Lamb” by Sarah Josepha Hale. The poem was based on an actual incident in Sterling Massachusetts. A girl named Mary Sawyer (later Mrs. Mary Tyler) brought her lamb to school and created a commotion. Very pleased with the incident, John Roulston, a visiting student rode his horse to the schoolhouse and handed Mary a slip of paper which had written upon it the three original stanzas of the poem. However, a different version of the story is that Hale composed the entire poem. Although Mary’s house was destroyed by arson a couple of years ago, the statue of Mary’s little lamb still stands in the town center. 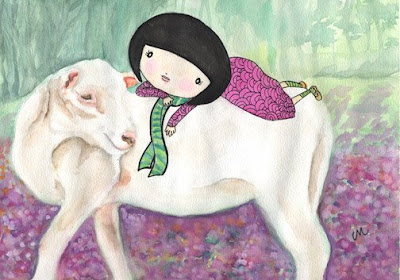 Mary had a little lamb
Whose fleece as white as snow.
And everywhere that Mary went,
The lamb was sure to go!

It followed her to school one day,
which was against the rules.
It made the children laugh and play,
To see a lamb at school.
Posted by Cat at 8:47:00 PM

How cute, just like your stuff but a little different too. Nice to have the song to sing along to, also!

Good to hear that you are better now - I was wondering if you went into a kind of late winter hibernation to prepare for spring...

Really sweet interpretation of Mary and her lamb. I always wanted to have one when I was a little girl.

I like the Mary and John backstory. Seems like John would be on some steed, in a Paul Revere costume, handing Mary the letter, mayhaps a snow backdrop.

And then there's the precious girl whose (sp?) laying on top of the lamb in the art below. Tis' cute!

Hello Ranx2!! Sorry I haven't visited often!! I didn't know you have been sick!!! Sorry it really sucks to have the flu!! I've been coughing too but not too bad...Oh I am glad you feel better!!!I have been busy with work...lately, I should start eating healthey and work out more!!! I lov your new paintings!!so cool!!I luv the song too! makes me feel like spring indeeed!!