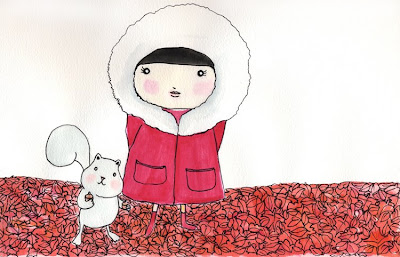 Has anyone seen squirrels attempt to get inside a bird feeder? It’s one of the most amusing things. Although it gets a bit annoying when birds run out of food. I have two feeders and normally fill them up every two weeks but once they located them, it was all over for the birds. I recently took them down because it’s winter but I’ll put them back up in the spring.

I don’t know much about squirrels except that they’re cute :). But did you know that the squirrel’s name can be traced back to ancient Greece, from the word “skiouros,” used by Aristotle – skia meaning shade, while “oura” means tail. Thus the meaning “he who sits in the shadow of his tail” was originated. In the subsequent centuries, the French created a noun “esquirel” to describe this creature. And that’s where the present word “squirrel” was derived.

More very interesting trivia: If you want to know more about these voracious creatures. I couldn’t believe it existed but here’s a website dedicated solely for them.