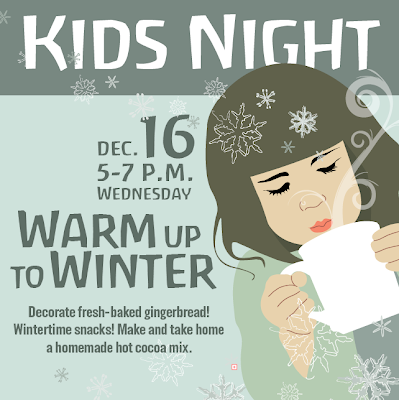 I love this banner. I made this for one of our Kid's Night events. Oh how I wish I was sipping some hot cocoa right now! It's been snowing for the past few days but it's too windy for a little stride around the neighborhood. I just saw a cardinal getting blown away by the wind while eating some seeds from our feeder. I wonder if they like the taste of cocoa beans.

A long time ago cocoa beans were a valuable commodity – they were used as currency as well as in cooking. The Aztecs were the first civilization who made chocolate drink but it's not the same one we're used to today. It was served cold with wine, chili peppers, and with no sugar. Sugar was not added until the 1500's when Cortez brought chocolate to Europe. This time it was served hot. One hundred years later, the cocoa enterprise continues. When it reached England in the 1700's milk was added to the beverage. It wasn't until the mid-1800s when it started to evolve past its liquid form. The Dutch invented cocoa powder. Subsequently, sugar was mixed with cocoa butter to create candy and in 1876, milk chocolate was developed. Perhaps in the next 100 years chocolate-made gas will be developed.


Source:http://coffeetea.about.com/cs/chocolate/a/chochistory.htm
Posted by Cat at 3:47:00 PM