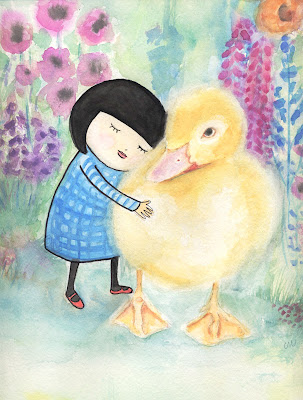 A couple of days ago my sister brought a duckling to the house. Apparently it was one of the strugglers – it could not come out from its shell by itself. So she took it home and helped it hatch.

I was already sleeping when she came home but she woke me up to show me the cutest duckling. The next day my boyfriend and I went to play with it and brought it a towel to snuggle up with. After playing with the duckling he and I went out to eat , came back and visited the garden. While we were in the garden my sister came rushing out and told us that she stepped on the duckling. I thought she was joking initially and realized it was true – the duckling was no longer with us – it went to duck heaven. It was a sorrowful day for the whole family and we are still lamenting over it. Piyo Piyo (named after a very popular duck in Japan in the 80’s) was with us for only a couple of days but left an imprint on our hearts forever.

When we first got it I went online to search about baby ducks and I found this great website. There’s a lot of useful information on this site – it’s worth visiting.

We miss you dearly.

Such a sweet picture, such a sad story to follow. All that is left is to have cared, you did that. You also took the time to search out information and have learned more too...just because that little duckling came into your life.

I, too, have stepped on baby kittens and though I have never lost one, just doing that was terrifying and made us rush to the emergency clinic to have them seen.

Thank you for sharing this and for the lovely drawing