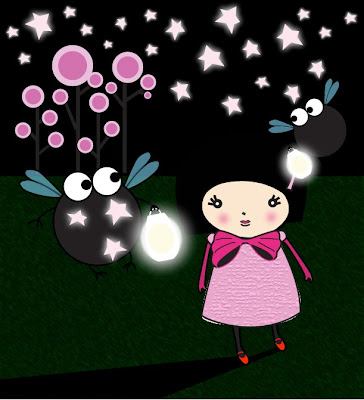 An older illustration from my sketchbook. I love watching the stars at night because it’s hard to see them at daytime. The only star you can see during daytime is the sun. We used to own a glow in the dark constellation book that we took to the roof top every night. I also made a star map out of cardboard and used the strings as coordinates. It was so much fun trying to locate them.

I know a lot about stars but know little about the nursery rhyme “Twinkle Twinkle Little Star.” So I did some reading and here’s what I learned:

“Twinkle Twinkle Little Star” was written by Jane Taylor and was first published in 1806 under the title “Star” in Rhymes for Nursery, a collection of poems by Jane and her sister Ann. The English lyrics have five verses; albeit, only the first verse is widely known.

Twinkle, twinkle, little star,
How I wonder what you are!
Up above the world so high,
Like a diamond in the sky!

When the blazing sun is gone,
When he nothing shines upon,
Then you show your little light,
Twinkle, twinkle, all the night.

Then the traveller in the dark,
Thank you for your tiny spark,
He could not see which way to go,
If you did not twinkle so.

In the dark blue sky you keep,
And often through my curtains peep,
For you never shut your eye,
Till the sun is in the sky.

As your bright and tiny spark,
Lights the traveller in the dark,—
Though I know not what you are,
Twinkle, twinkle, little star.

The tune came from the 1706 French melody Ah! Vous dirai-je, Maman, which Wolfgang Amadeus Mozart later composed with twelve variations when he was 25. Many nursery songs are based on this melody including “ABC” and “Baa Baa Black Sheep.”

oh I don't even remember the ;ast time I looked at stars...i should go out and look up sometimes!! hey I thought you might like this artist!

They usually shows up after dark. I hope you found some. I rarely see them here – we have too much street lights. Thank you for the website. I love her drawings. Her character reminds me a bit of mine hehehe.