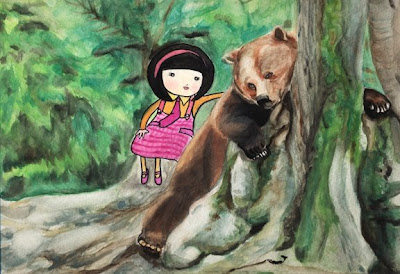 Bears are very popular with kids especially Teddy Bears. Although I didn’t own one, I still think they are very cute. I played mostly with puzzles and mechanical toys (especially robots). But did you know that Teddy Bear is originally called Teddy’s bear? The name came from America’s 26th president, Theodore Roosevelt.

When President Theodore Roosevelt went on a hunting trip to Mississippi, to which he was invited by Mississippi Governor Andrew H. Longino, he was asked to shoot an American Black Bear. There were several hunters competing and most of them had already shot something. So they called Roosevelt to the site and instructed to kill the bear, which Holt Collier and Roosevelt’s attendants had tied to a willow tree after being cornered and clubbed. Roosevelt refused to shoot the bear but asked that the bear be killed to end its suffering. This incident
became the topic of a political cartoon by Clifford Berryman in The Washington Post on November 16, 1902. The adult black bear cartoon was initially lassoed by a white handler but later Berryman made the bear cuter and smaller. When Morris Michton saw the drawing of Roosevelt and the bear cub, he was inspired and created a new toy – a stuffed bear cub. After sending the bear to Roosevelt and receiving permission to sell them, he put them in his shop window with a sign that read “Teddy’s Bear.” The toys became an immediate success, which led Michton to open the Ideal Novelty and Toy Co. in 1907 that still exists today.

The Giant Panda is one of the most misunderstood animals on the planet. For many years, it was believed to be a type of racoon, like the similarly named red panda. However, genetics testing and observation have revealed that the panda is in fact, a bear. It has only been since 1995 that the Panda has been officially considered a bear.